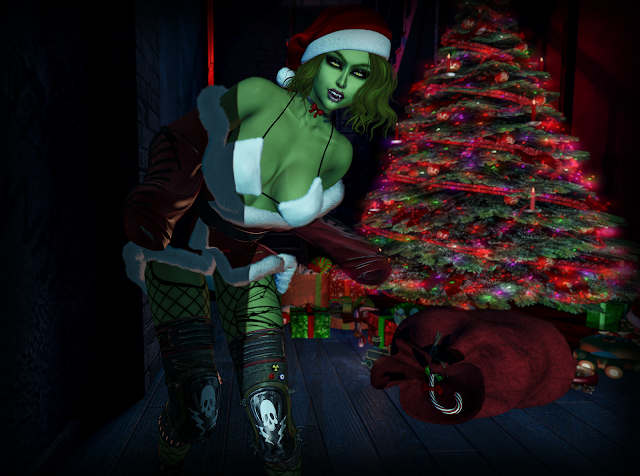 Unbelievably so, it is yet again December ! But leave it to me to twist the season around ! 😜
Worn with Maitreya body / Catwa Lilly head
In truth, really wanted to show you these awesome new kneepads by Psycho:Byts, but kinda still felt the urge to make it Christmassy so here we are !
.{PSYCHO:Byts}. Fury Burn - Knee Pads @ Salvage Station - From midcalf to midthigh, this is a whole lot of awesome ! Rigged for Maitreya and Legacy, and with an extensive texture hud allowing you to mix up to 3 different areas per sock from the 18 available texture options (for each leg even, so you can have them colored different if you like!) , plus metal, pads and leather colors with 8 options for each , the possibilities are ...well, ok, I can't do math but, like , A LOT for sure 😁
Check out the promo pic for it as well at the end of the blog, will give you a good idea on textures included !
Other stuffs:
Hair:
Doe: Santa Baby - Indecisive @ Doe
Lipstick:
Izzie's - Holo Metallic Lipstick (Catwa) combined with Izzie's - Sheer Natural Lipgloss, both can be found at Izzie's
Dress:
:: MOMOCHUU :: M.I.A Coat [Red A ] @ Momochuu
Bra:
Moon Elixir - Rich Girl - Bikini - Snow @ Moon Elixir
Stockings:
[MODA] Fishnet Leggings (BOM) @ Moda - includes regular and torn versions, BoM only.
Xmas tree:
[AD] [Silent Night] Christmas Tree (Red) @ Angelic Designs
.{PSYCHO:Byts}. Fury Burn - Knee Pads Promo 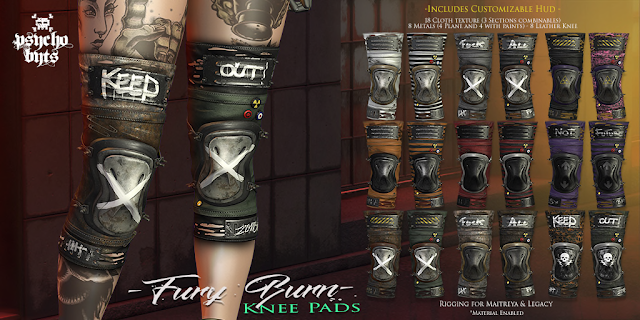 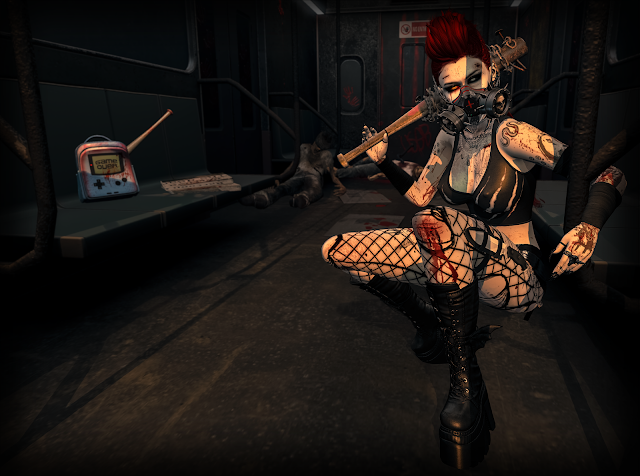 Now for the other stuffs !
As always, worn with Maitreya body / Catwa Lilly head
Hair:
adoness : bremusa : red @ Adoness
Available in several color packs, each also including an extra tint hud for you to get just the right shade!
(Paired it with the mesh *booN cornrows hairbase and the Just Magnetized - Basic Hairbase - set 10, but it can be easily used with an applier hairbase too)
Blood:
Izzie's - Face & Body Blood & Wounds @ Izzie's
Tats:
!SIDIKA SAKA! Gamers Never Die Tattoo Bom @ Sidika Saka
Mask:
.{PSYCHO:Byts}. PAZUZU RESPIRATOR @ Necrotize - New from Psycho:Byts, available at the event until November the 20th, including a generous texture hud, allowing you to mix and match for all sorts of color combinations ! Check out the closeup below for all the badass details to it, and the promo at the end of the blog as well, for a quick peek at the texture options. 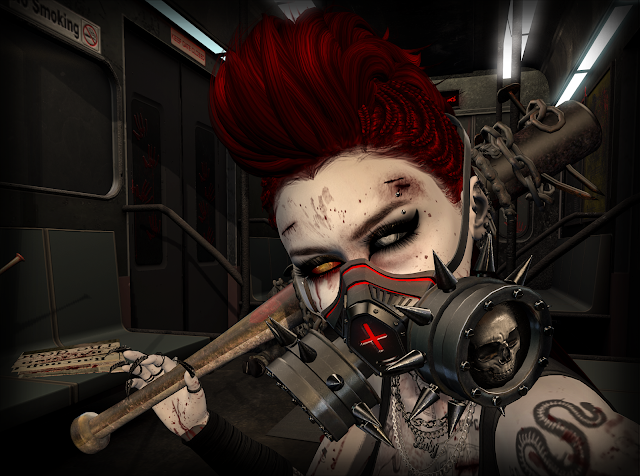 .{PSYCHO:Byts}. Naamah Boots @ The Dark Style Fair - New from Psycho:Byts , available at the event until October the  30th. Fitted for Maitreya and Legacy bodies, of course, with a detailed texture hud to make it oh so easy to fit them with any outfit.
I am like totally OBSESSED with these boots, can't lie, they're tall, and stompy, but the sole has a hint of a curve to it so it does not look bulky at all, and then there are the adorable tiny batwings on the sides ,and I am just like AAAaaaAAaaaaAaaaaaaaaaAAaaah , so fucking perfect !
Promo pic at the end of blog, showing all colors as well !
N-core LORA Top Black @ N-Core
Stockings:
[MODA] Fishnet Leggings (BOM) @ Moda - includes regular and torn versions, BoM only.
.{PSYCHO:Byts}. Naamah Boots Promo 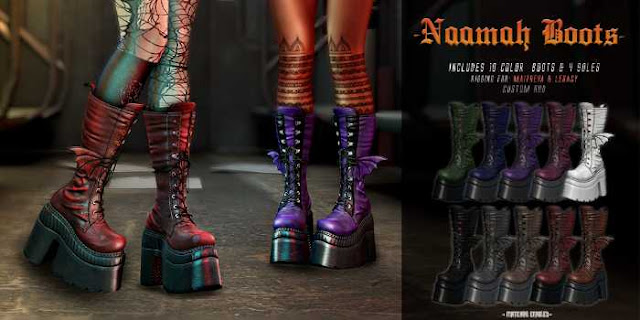 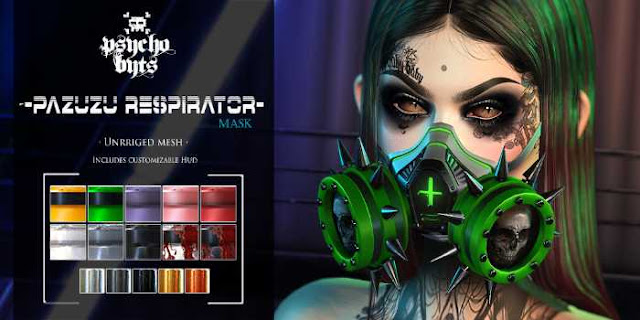 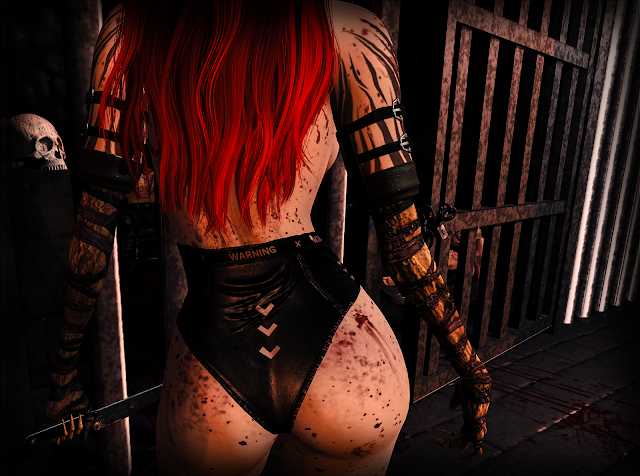 Today marks 3 years since I've gotten my blogger acceptance from Psycho:Byts, and even more years since they've been making my ass look fantabulous... well, and all the other parts too, of course 😁
As a thank you for their continued sponsorship, awesomeness and understanding, must celebrate with, of course, a great shot of my behind, murder style 😜
And what am I wearing ? Not much but ... here we go 😁
Worn with Maitreya body
Shorts:
.{PSYCHO:Byts}  Aixa Lingerie @ PSYCHO:Byts - Only wearing the shorts, but this is in fact a set, you can check out the full promo below!
Arms:
.{PSYCHO:Byts}. Nekhbet Mummy Arms @ PSYCHO:Byts - wearable as full arm, half, or just hand, plus with an extensive coloring hud, makes it super easy to fit this with all sorts of outfits/looks !
As for the backdrop, using the badass new release from Beauty of Darkness , 25% OFF for the duration of the event !
.:BoD:. Dungeon Jail Backdrop @ Necrosis - The backdrop itself is quite versatile, it allows so many angles for taking different shots ! Check out the promo for it below !
.{PSYCHO:Byts}  Aixa Lingerie Promo 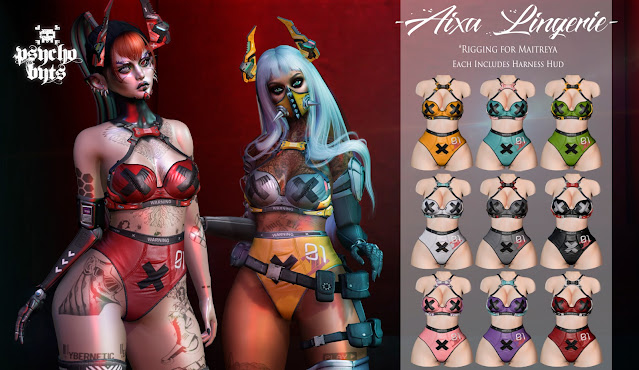 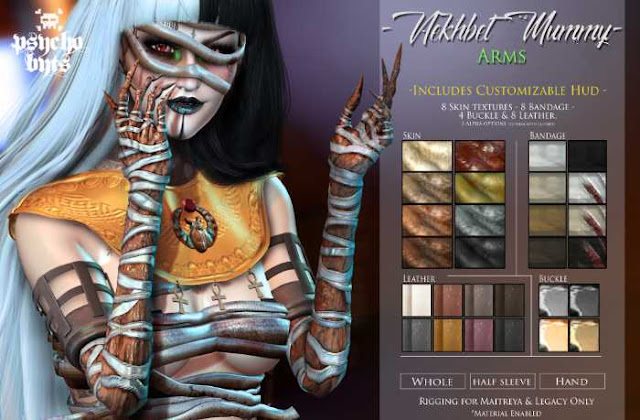 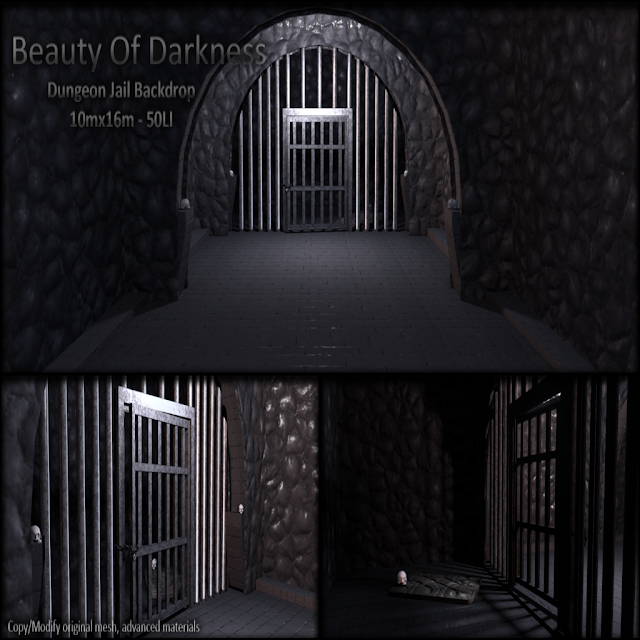